To inspire your very own Future Heirloom.

Coloured Gemstones are rare and valuable and in times gone, used to be reserved for royalty alone giving rise to the many myths and legends associated with the various gems.

As trained Gemmologists our designers are just as fascinated with coloured gems as we are with diamonds, and love creating unique personal heirlooms, so we thought we would share some of our favourite gem legends for inspiration.

The Hope diamond is possibly the most famous coloured gemstone of all time, and has been owned by royalty in Britain, France and Turkey, and now takes it’s name from a banker Thomas Hope.  Mostly due to the misfortune that has befallen most of it’s owners. 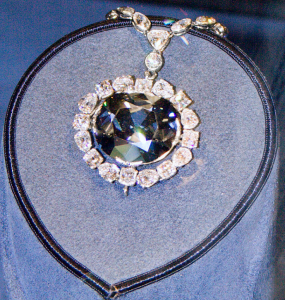 Originally one from the world famous Golconda Diamonds from Kollur Mine, Guntur, Andhra Pradesh in India.  Then was it was bought by French gem merchant Jean-Baptiste Tavernier who called it the ‘Tavernier Blue’’. Once cut, it was sold to King Louis XIV in 1668 and  became ‘The Blue Diamond of the Crown of France’’ , and was Stolen in 1791 after the French royal family met their end and was smuggled to Britain during the French Revolution where it was recut again and showed up at auction as The Hope Diamond in 1839 as part of the Hope families gem collection. Often sold to cover debts it then changed hands many times, giving rise to the Hope Diamond Curse. After going through numerous owners, it was sold to Washington socialite Evalyn Walsh McLean, who was often seen wearing it.

It was purchased in 1949 by New York gem merchant Harry Winston, who toured it for a number of years before giving it to the National Museum of Natural History of the United States in 1958, where it has since remained on permanent exhibition.

It’s much-admired rare blue colour is due to trace amounts of boron atoms. Weighing 45.52 carats, its exceptional size has revealed new findings about the formation of diamonds.

It also inspired the gem ‘the star of the sea in the movie Titanic, and it’s design with a claw set halo of white diamonds in pear, and princess cuts has inspired many personal heirloom pieces with it’s timeless appeal.

Diamonds are the birthstone for April, and come in a range of colours from colourless, yellow, champagne, pinks, reds, blue, green, salt and pepper and black.

As the gem traditionally gifted in an engagement ring they represent the unbreakable bond between husband and wife, with Diamond coming from the Greek word αδάμας (adámas) meaning ‘unbreakable’.  Spiritually they also represent the power of intellectual knowledge, and are a symbol of light, purity and brilliance, and unconquerable treasures and riches.

The gem’s origin is thought to be a mine in what is now Tajikistan, and is actually a gemstone called Spinel, and not a ruby at all.  Spinel comes in a range of colours from bright red through to grey/blue and when cut well has the same dispersion as a diamond due to it’s remarkable clarity.  It is a beautiful choice for those seeking a colour rich and durable gem particularly in a sparkling pink or red. 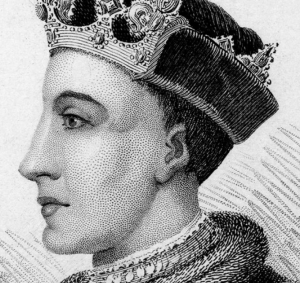 Another gem with a dark history,  it was originally owned by Abū Sa’īd, the Moorish Prince of Granada in the 14th Century, who was murdered by Don Pedro the Cruel. Don Pedro took the jewel, but when he was then threatened with a revolt was obliged to give it to the Black Prince, son of Edward III of England, in return for his help.  It was then set into the Black Prince’s crown in it’s uncut state and is roughly the size of a chicken’s egg.  It is an inspiration for those loving big cabachon gems, and is more gothic in style, slightly resembling a skull. 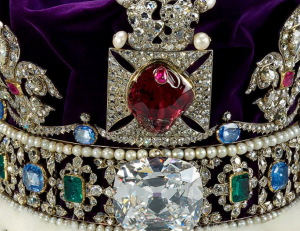 Amazingly pure and unusually large, this is one of the largest star sapphires in the world, and one of the most famous. Light bouncing from the mineral rutile, which is included in the stone, forms a star pattern in reflected light. 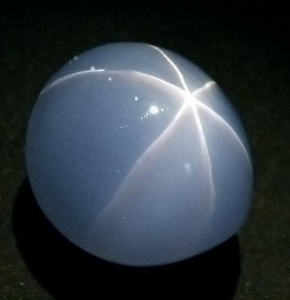 The size of a golf ball, the gem has been polished to the shape of a dome to enhance the star’s beauty.

The gem was donated to the American Museum of Natural History in 1900 by financier J. P. Morgan. In 1964, it was stolen from the museum along with other famous jewels, including the Midnight Star, the DeLong Star Ruby, and the Eagle Diamond. The gems were later recovered from a locker in a Miami bus station, except for the Eagle Diamond, which was never seen again.

Sapphire is the birthstone of September, and for centuries has been seen as a symbol of the Divinity.   Blue was a colour used by priests to show their association with the heavens.  Sapphire means truth, faithfulness and sincerity.  Sapphire is also associated with divine favour, and has long been associated with royalty.  In an engagement ring, a sapphire means faithfulness and sincerity,  it is believed to bring fulfilment, joy, prosperity and inner peace and beauty to it’s wearer.

This humongous large specimen is not a gem quality pearl, but a calciferous growth from the giant Tridacna clam, but nevertheless it’s history and heirloom status gives an indication of how a good story can create worth in and of itself.  The following is taken from an article by Michael LaPointe – you can read the full article here: https://www.theatlantic.com/magazine/archive/2018/06/the-pearl-of-lao-tzu/559109/ 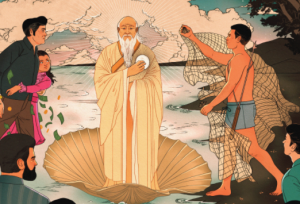 Legend says the diver drowned retrieving the pearl. Trapped in a giant Tridacna clam, his body was brought to the surface by his fellow tribesmen in Palawan, a province of the Philippines, in May 1934. When the clam was pried open, the local chief beheld something marvellous: a massive pearl, its sheen like satin. In its surface, the chief discerned the face of the Prophet Muhammad. He named it the Pearl of Allah. At 14 pounds, one ounce, it was the largest pearl ever discovered. 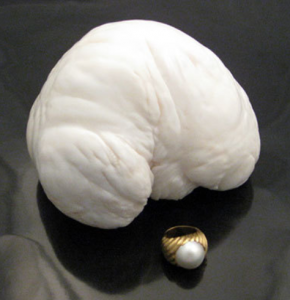 A Filipino American, Wilburn Dowell Cobb, was visiting the island at the time and offered to buy the jewel. In a 1939 article that appeared in Natural History magazine, he recounted the chief’s refusal to sell: “A pearl with the image of Mohammed, the Prophet of Allah, is earned by devotion, by sacrifice, not bought with money.” But when the chief’s son fell ill with malaria, Cobb used atabrine, a modern medicine, to heal him. “You have earned your reward,” the chief proclaimed. “Here, my friend, claim this, your pearl.”In 1939, Cobb brought the pearl to New York City, and exhibited it at Ripley’s Believe It or Not, on Broadway. There, a new legend emerged, eclipsing the first. Upon seeing the pearl, Cobb said, an elderly Chinese gentleman “of highest culture and significant wealth” named Mr. Lee “burst into an hysteria of trembling and weeping.” This wasn’t the Pearl of Allah; this was the long-lost Pearl of Lao Tzu.Around 600 b.c., he told Cobb, Lao Tzu, the ancient Chinese philosopher and founder of Taoism, carved an amulet depicting the “three friends”—Buddha, Confucius, and himself—and inserted it into a clam so that a pearl would grow around it. As it developed, the pearl was transferred to ever-larger shells until only the giant Tridacna could hold it. In its sheen, Mr. Lee claimed, was not just one face, but three.

On the spot, Mr. Lee offered Cobb half a million dollars, saying the pearl was actually worth $3.5 million. But like the principled chief before him, Cobb refused to sell.

The mysterious Mr. Lee returned to China, never to be heard from again. But his spontaneous appraisal—$3.5 million—still forms the basis of a price that has steadily grown, from $40 million to $60 million to $75 million and beyond. And Mr. Lee’s recognition of Lao Tzu’s legendary pearl is at the heart of an 80-year-old hoax that has left a trail of wreckage across the United States—a satin mirage many try to grasp, before the jaws snap shut.

Inspiration for those who love the mysteriousness of Pearls, and who also love the embellishment of a good story, minus the scrambling over the inheritance of course!  Pearls symbolize wisdom gained through experience, and are the birthstone for June, Pearls are thought to attract wealth and luck as well as protection. The pearl also symbolizes purity, feminine mystery, moon energy, and water elements.

Discovered in 1949, the Andamooka Opal is said to be the finest opal ever discovered. It’s particularly praised for its size (203 carats) and the depth and vibrancy of its colors. 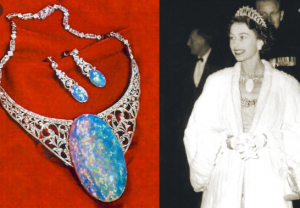 Gifted to Queen Elizabeth II on her Coronation as a gift from the Australian people she carries on the Royal love of this most precious gem. Queen Victoria was a great lover of opals and the Royal Vault has many fine specimens.

Opals were revered through ancient times. The colourful gemstone represented fidelity. The Ancient Greeks believed that the gem bestowed foresight and prophecy to their owners.  In Roman times they were called patronus furum in Latin, translating to “patron of thieves,” due to people believing that if they carried opals wrapped in fresh bay leaves, they would be invisible. Today, the stone is considered lucky for businesses in China and Japan, and is still revered by mystics and shamans as enhancing psychic properties.

This exciting discovery of a collection of 400 pieces of 16th and 17th century jewellery in a box that belonged to Queen Elizabeth was found buried in a cellar in Cheapside near St. Paul’s Cathedral, London.  The stories and assumption of the hoard burial is vast and varying.   Perhaps a thieves’ forgotten stash, it’s significance is that it the largest hoard of its kind ever found in Britain with pieces dating from the very late 16th to the early 17th century.  Part of the reason why it’s so important is that heirloom jewellery tends to be broken up, refashioned, reworked, and so therefore doesn’t survive.  Because this was buried and lay undisturbed for the better part of 300 years, it survived in the condition that it has giving us a glimpse of the stunning workmanship all achieved with basic hand tools.

The most amazing example of this is  a pocket  watch made of Colombian emerald crystal  hand carved in the 1600’s that allows you to read time through a closed lucid lid that makes one completely spell bound and speechless. 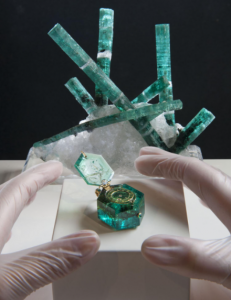 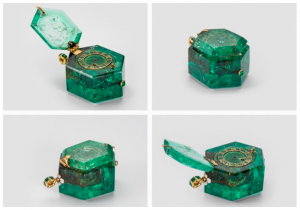 Emerald is the birthstone for May babies, and Emerald green is the colour of the heart chakra, and signifies abundance, prosperity and growth within all aspects of life, whether it’s being expressed in nature, the business world, or inside ourselves.  In engagement rings or as a gift to a lover it signifies steadfast pure love.

If you are looking to create your own heirloom piece, then get in touch today and let us help you make a family legend come to life.